In vitro fertilization (IVF) is a medical procedure that has helped many people become parents. During IVF, eggs are collected and fertilized in a laboratory setting. The resulting embryos are then transferred into the uterus for implantation. If you are pursuing or considering IVF, you have likely heard that genetic testing can help increase the likelihood of a healthy pregnancy.

Genetic testing can be done at several points in the IVF journey. In this article, you’ll learn about one type of preimplantation genetic testing (PGT), which is done on a sample from an embryo before it is transferred to the uterus. PGT can help increase the likelihood that IVF will be successful by informing which embryos are most likely to be genetically healthy.

We’ll focus on the most common form of PGT: preimplantation genetic testing for aneuploidy (PGT-A). PGT-A looks at embryos to determine if they are likely to be affected by a chromosomal anomaly, which can have significant effects on a pregnancy and a baby.

What is a Chromosomal Anomaly?

A chromosomal anomaly is a change in the expected number or structure of chromosomes. During reproduction, small errors in the formation of an egg or sperm, or in early embryo growth, can result in chromosomal anomalies. These errors can happen by random chance and can occur in all types of pregnancies, regardless of how they were conceived.2

Some types of aneuploidy include:

Each type of aneuploidy can have significant effects on an embryo’s chance of developing into a healthy pregnancy. Triploidy, while rare, can cause a developing baby to have severe growth problems.5 Most cases of triploidy result in early miscarriage.5 If a baby is born with triploidy, they are unlikely to survive more than a few days and will usually require major medical care.6

Aneuploidy is also the most common reason that an IVF cycle does not result in a healthy pregnancy. The likelihood of an embryo having aneuploidy increases with the biological mother’s age.7 Women under 35 years old have up to a 37% chance of aneuploidy being present in an embryo, and women over 40 years old have a 75% chance.8

PGT is a form of genetic testing that looks at the genetic health of embryos produced during IVF. PGT screens embryos from an IVF cycle for certain genetic anomalies. Testing identifies which embryos have the highest chance of leading to a healthy pregnancy.

While PGT is highly accurate, it cannot detect every possible genetic anomaly. For that reason, if you become pregnant with an embryo that has been tested with PGT-A, your doctor will likely recommend standard prenatal testing to help identify any health concerns early.9

There are three types of PGT. Each type looks for different types of changes in an embryo’s genetic structure:

All three types of PGT are performed at the same stage of embryo development and can sometimes be performed on the same sample of cells.

Deciding whether to have PGT and which type(s) to have is an important step in your IVF journey. The decision can depend on your personal or family history. For example, if you know that you or your biological partner are carriers for a single-gene condition such as cystic fibrosis, you could opt for PGT-M.

PGT could also be a good choice for you if you simply want to know as much about your embryos as possible before transfer. Discuss your goals and questions with your doctor and/or genetic counselor before deciding on PGT and the specific types you want performed.

PGT-A looks specifically at whether an embryo has aneuploidy—extra or missing chromosomes. Aneuploidy is a leading cause of embryo transfers that do not lead to implantation and pregnancy.7 Having PGT-A results can help your doctor choose the most genetically healthy embryo(s) to transfer.

You will sometimes see PGT-A referred to as PGS (preimplantation genetic screening). PGS is simply an older term for PGT-A. It reflects the fact that PGT-A is a screening test that provides the likelihood that embryos are affected by aneuploidy. It is not a diagnostic test. That is, PGT-A cannot tell you with absolute certainty whether an embryo has a chromosomal anomaly. However, today’s PGT-A methods are highly accurate for detecting the likelihood of an anomaly.

For some people, PGT-A has been shown to reduce the time to pregnancy.10 If your doctor recommends a single embryo transfer (SET) to avoid the possibility of a multiple pregnancy, PGT-A can help increase your confidence that you are choosing the embryo with the highest chance of developing into a healthy pregnancy.7 PGT-A has also been shown to decrease the chance of miscarriage.11

Who Should Consider PGT-A?

PGT-A is available to most people pursuing IVF. The decision whether or not to use PGT-A is up to you and your doctor. Your doctor is more likely to recommend PGT-A if you:

Clinical studies suggest that PGT-A is especially useful if the egg provider is over 35 years old.7 The following graph illustrates how the rate of chromosomal anomalies increases with the age of the biological mother.8 These embryos were tested with SpectrumTM, a PGT-A from Natera. 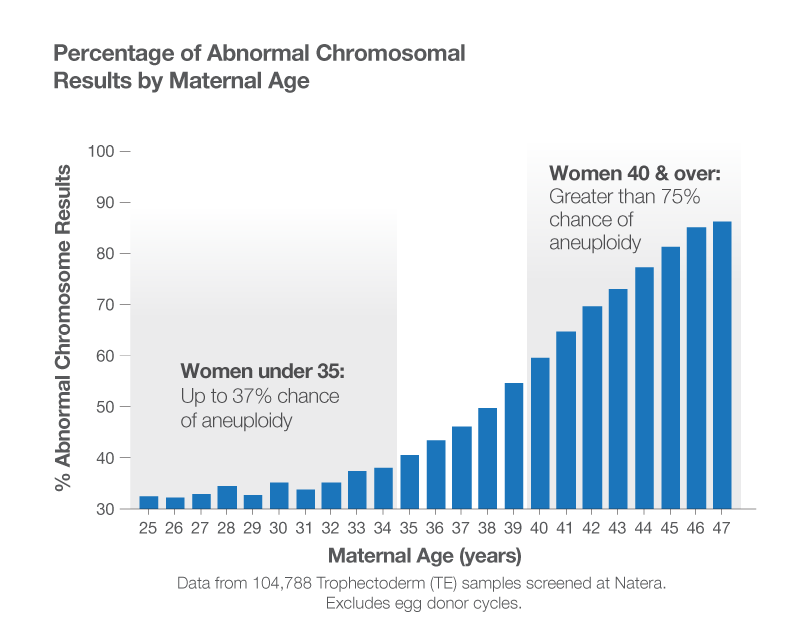 More than half of embryos provided by a biological female older than 37 had a chromosomal anomaly.8 For this reason, PGT-A is more likely to be recommended when the egg provider is older.

How Does PGT-A Work?

First, a clinician carefully takes a small sample of cells—also known as a biopsy—from each embryo you want to be tested with PGT-A. PGT-A techniques have been refined to reduce the possibility of any damage to the embryo during the biopsy.14

After the embryo sample is collected, it is shipped to the genetics laboratory that will perform the PGT-A. The embryos are then frozen and stored at the IVF clinic.

The genetic lab uses advanced technology to complete PGT-A on the cell samples it receives. The results will be sent to your doctor, who will review them with you. Your PGT-A report will inform you whether each tested embryo is likely to have aneuploidy (extra or missing chromosomes) or euploidy (the expected 46 pairs of chromosomes). If an embryo is identified as having aneuploidy, the affected chromosome and the type of aneuploidy are also reported.

After you discuss your PGT-A results with your doctor, you can decide if you’d like to transfer any of the embryos that were tested. You can choose to keep the embryos that you do not transfer frozen for later use.

PGT-A adds other considerations to your IVF cycle. For example, PGT prevents the possibility of a fresh transfer because embryos must be frozen while you wait for your PGT-A results. However, fresh transfers are not recommended for all people. In a fresh embryo transfer, the medications taken to encourage egg maturation can have effects on the lining of the uterus, and reduce the chance that a transferred embryo will implant. Fresh transfers are also associated with a higher likelihood of certain pregnancy complications.15 Since 2008, a higher rate of live deliveries has been noted in frozen cycle transfers, which can use PGT-A, compared to fresh cycle transfers, which cannot.16

Ultimately, the decision to use PGT-A is highly personal. You should talk with your doctor and/or genetic counselor to help you decide whether it is right for you.

Spectrum™ PGT-A from Natera has been studied to learn whether it helped people achieve their goal of a healthy pregnancy. Study results showed that PGT-A improves pregnancy rates for parents of all ages.7 Spectrum uses advanced genetic technology to screen all 24 chromosomes in a cell (22 chromosome pairs and the sex chromosomes X and Y). There are two versions of Spectrum, Spectrum SNP, which uses unique features of an embryo’s DNA to analyze its health, and Spectrum NGS, which uses next generation sequencing (NGS) technology for analysis. Both improve IVF success, but each has slightly different additional features.

In addition to a small sample of cells from your embryo(s), Spectrum SNP PGT-A also requires a blood, cheek, or sperm sample from the biological parents. Once Natera receives all of the samples, the PGT-A is performed. Your doctor will receive a report containing the Spectrum results within 5 business days.

Your Spectrum SNP PGT-A report will indicate which embryos have aneuploidy and which have euploidy. It will rank the embryos with euploidy in order of confidence–meaning with how much certainty the embryo can be said to contain the expected number of chromosomes.

You will also receive a table showing the number of copies of each chromosome for every aneuploid embryo. This number is also accompanied by a confidence, or an estimate of the probability that the number is correct. For example, a >99% confidence for a result that shows one of the tested embryos has 3 copies of chromosome 16 means there is nearly a 100% chance of that embryo truly having 3 copies of chromosome 16. Spectrum has a typical accuracy of >99% for each chromosome.18

Spectrum NGS uses advanced sequencing technology to analyze embryo DNA. While it cannot confirm the parents of an embryo to prevent a mix up, it is able to detect a condition called mosaicism that can impact IVF success.

Mosaicism is a condition in which some of an embryo’s cells have the expected 46 chromosomes and other cells have aneuploidy. Mosaicism is caused by errors during cell division as an embryo grows. Depending on the type of aneuploidy in the mosaic cells and what proportion of cells are impacted, mosaicism can lead to miscarriage or cause health problems during pregnancy and after birth.17

Mosaicism detection requires adding the use of next generation sequencing technology. If you are concerned about the potential for mosaicism, Spectrum NGS PGT-A can detect the condition as long as the biopsied cells contain both cells with the expected number of chromosomes and cells with aneuploidy. Talk with your doctor to learn if choosing Spectrum NGS for mosaicism is best for you.

What Are the Benefits of PGT-A?

If you are concerned about the genetic health of your embryos, PGT-A can help inform which embryos in an IVF cycle are the most likely to lead to a healthy pregnancy.

Spectrum features a bioinformatics technology called Spectrum Parental SupportTM. Parental Support is based on single nucleotide polymorphisms (SNPs)—the 1% of DNA that makes each of us different. It analyzes 300,000 SNPs to provide highly accurate PGT-A results. 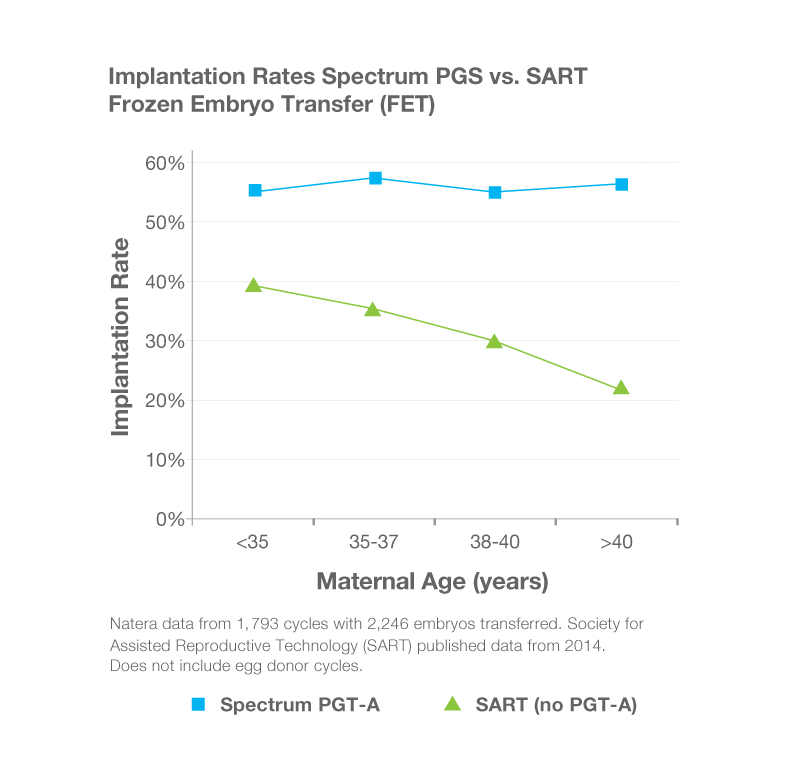 Pregnancy rates followed the same pattern as implantation rates. The following graph shows how often an embryo transfer led to a pregnancy for embryos tested with Spectrum PGT-A (blue columns) and without PGT-A (white columns). This graph illustrates that embryo transfer was more likely to result in a pregnancy when Spectrum was used, regardless of the biological mother’s age.7 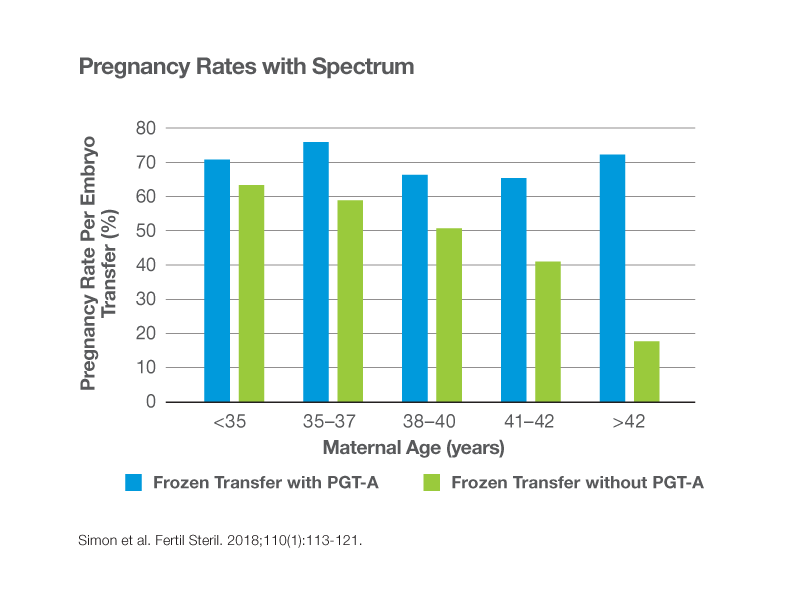 Importantly, the rates of implantation, pregnancy, and live birth did not change significantly when only one embryo was transferred instead of two.7 This finding is important for people transferring a single embryo in order to avoid the possibility of a twin pregnancy, which can cause medical complications, especially among older pregnant people.7 For these people, PGT-A can provide critical information to help select the single healthiest embryo to transfer.7

Getting the Most Out of PGT-A

If you become pregnant, additional prenatal genetic testing options are available. These options include both screening and diagnostic tests, which can help you learn more about the genetic health of your developing baby.

As part of Natera’s commitment to our patients, we offer complimentary genetic information sessions with board-certified genetic counselors before and after testing.

Spectrum tests have been developed and their performance characteristics determined by the CLIA-certified laboratory performing the test. The test has not been cleared or approved by the US Food and Drug Administration (FDA). CAP accredited, ISO 13485 certified, and CLIA certified. © 2022 Natera, Inc. All Rights Reserved.